A person can only take so many churches and museums and charming towns We went to Disneyland Paris today for something completely different than what the last six weeks were like. It’s easy to get to from Paris. It’s served by the RER-A metro line which is apparently one of the busiest commuter lines in the world (not due to the park but the other outlying stops it makes between the park and Paris).

Our trip out was a bit longer than it should have been as there was either an accident or a breakdown somewhere along the 4 line which we needed to take to get to the RER line. It’s fairly typical of Paris metro stations to serve more than one line so we instead took the 10 to the 7 to the RER. It only added another 20 minutes once we figured out thats what we needed to do. Anyway, we’re becoming experts at the Paris Metro system now 😉

The trip to DisneyLand only takes about an hour from downtown Paris. There are two parks DisneyLand park and Walt Disney Studio Park. We bought a park-hopper pass which allowed us to visit both parks.

DisneyLand park is very much like DisneyLand in California or the Magic Kingdom in Orlando. I guess if you have a formula that works, why mess with it? The park isn’t as large as either one but it does have some of the more popular rides. Thunder Mountain Railway, Haunted Mansion, Pirates of the Caribbean, Space Mountain etc. No Splash Mountain and No Country Bear Jamboree (Much to Deanna’s disappointment). Deanna also mentioned that the haunted house is much less scary in French than it is in English.

Walt Disney Studios is a smaller version of the like named park in Orlando. It’s theme is the animation and film side of Walt Disney. There are attractions like a special effects stage, animation exhibits and that sort of thing. We didn’t spend too much time here but we did attend a stunt show that involved shooting a live action car chase scene.

We caught part of the parade and did see one stage show with the Disney cast of characters singing (in multiple languages) and performing around a halloween theme. We’re not sure how big halloween is here in France. This was the first we’ve seen of anything halloween related. I’m guessing that it’s mostly a north american thing.

It was a fun day and like I mentioned something totally different than what we’ve done for the past six weeks. It was a distraction as we’re both missing our family and friends on Thanksgiving. 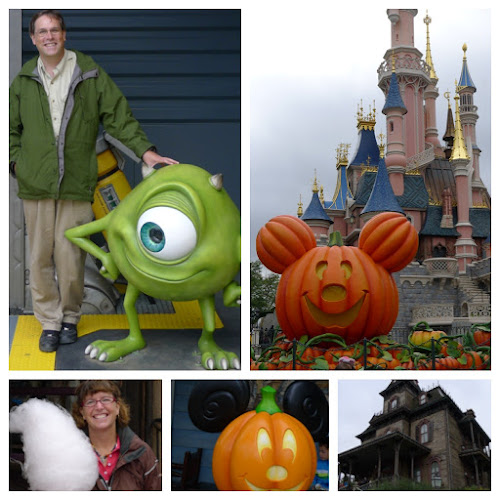