We have another day on our Paris Museum Pass so we decided to venture out and take in a few more museums today. We started at the Louvre. It was busy, but again, we didn’t have to wait in the line to buy tickets with our pass. Armed with our trusty audio guide of the museum we spent a couple of hours winding our way through a few centuries of art. From early greeks and roman statuary through to Italian and French Renascence. There are a few must see pieces at the Louvre and we did our best to jockey with the crowds to see them. It’s an overwhelming space with more than 30,000 pieces on display. The best one can hope is to scratch the surface and plan on coming back one day soon to continue exploring.

From the Louvre, we hopped on the Metro to head back to see Saint Chappelle and Conciergerie, two spots covered by our museum pass that we skipped on our walking tour on Friday.

Saint Chappel has some of the most beautiful stained glass we’ve seen on our trip. The cathedral itself is just ok, but it’s known for it’s stained glass. It was originally commissioned by King Louis the IX to hold the Crown of Thorns.

Next door is the Conciergerie which played a crucial role in the French Revolution. It’s where the ruling elite was sentenced to death. The most famous prisoner was Marie Antoinette.

From there we wandered back to Notre Dame and considered climbing the stairs to bell tower but the line was too long and our museum pass didn’t allow us to get around it so we skipped it and instead went to the Pantheon which is not too far from our hotel.

The Pantheon was originally a church to St. Genevieve but it’s mostly used as a crypt for some of the more famous folks from France’s history. Here you’ll find the remains of Marie Curie and her Husband, Victor Hugo and dozens of others. It also contains a huge Foucault Pendulum which illustrates the earth rotation. It’s quite impressive to see. 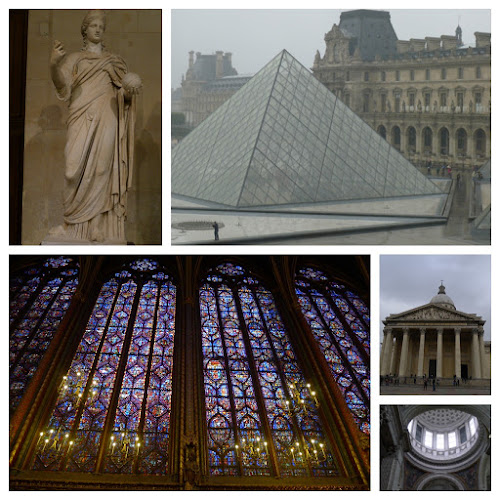 We were exhausted and headed back to the hotel for the night.

We are missing being home, missing Thanksgiving and our family. A few more days and we’ll be heading home.