Deanna was feeling a bit better this morning so we decided to head out and visit some champagne cellars. There are many that are found in Reims. As I mentioned earlier, the weather has turned a bit on us. Gone are the lazy sunny days of last week to be replaced by cool and rain. It was with rain coats on we headed to find a bus to take us to one of the Champagne cellars. This is one time where our guide book let us down. We thought we could take a city bus from the train station, but after asking a driver she indicated another bus at another stop. We wandered to that stop and waited. And waited 10 minutes past the posted time when the bus was supposed to come. In the rain. And it didn’t come. So we started walking and then got grumpy about walking and decided to find a tourist information spot so we walked there. By this time we had been out in the rain for over an hour, no breakfast and Deanna wasn’t feeling 100%. We’ve had better moments.

We did make it to the tourist information building, made one booking and figured out where to catch the bus to take us where we wanted to go.

Our first tour was at Taittinger. The cellars are built on top of an ancient quarry that was originally constructed by the romans in the 400s. It’s a large sprawling complex of chalk and limestone that is perfect for keeping champagne at the correct temperature and humidity. The tour started with a 10 minute video explaining a bit about the process of making champagne.

I didn’t know this, but champagne is always a blend of various grape varieties. Chardonnay, Pinot Noir and Pinot Munier are the only types allowed into wines that can be called champagne. Most champagnes are made up of grapes from all over the regions that may have been grown in different years. The wine maker composes the taste for his particular wine, by selecting and composing the flavors he wants from a variety of sources. Champagne is aged in the cellars for a minimum of 18 months but it is common for champagnes to be cellared for many years. It’s a two stage fermentation process where in the second stage, yeast and sugar is introduced. This is where the bubbles come from. The longer a champagne has been aged the number of bubble goes up and the size of the bubbles goes down. A good champagne has lots of small bubbles.

After the movie, we toured the caves where they still have 3 million bottles. They have another 13 million bottles at another site. At Taittinger, they still employ the manual turning of at least some of their champagnes called Riddling. A Riddler can turn as many as 7500 bottles an hour. It’s cold, hard work and not many young people want to do this anymore. Many producers are using more automation.

At the end of the tour we got to sample one of their champagnes. We both quite liked it. Deanna is a bigger fan of champagne than I, but this particular one was quite tasty.

We had an hour before the next tour which was just down the road so we grabbed a ham and cheese croissant and some chocolate chip cookies from a boulangerie and waited. It rained off and on so we ended up hanging out in a bus stop until the second tour opened at 2:00 after lunch.

The second cellar we stopped at was G.H Martel & Co. It was a bit more intimate in size than the first tour (20 compared to 40+), and followed the same sort of approach. A short movie (that had more information than the first one), followed by a tour of the cellars (not in use at all anymore here, except for the tours), and a tasting. In this case we tried three different champagnes We preferred the Taittinger to all three of these ones. They didn’t have the same flavor and qualities as the first one we tried. It was a very interesting tour and we’re glad we did both of them. 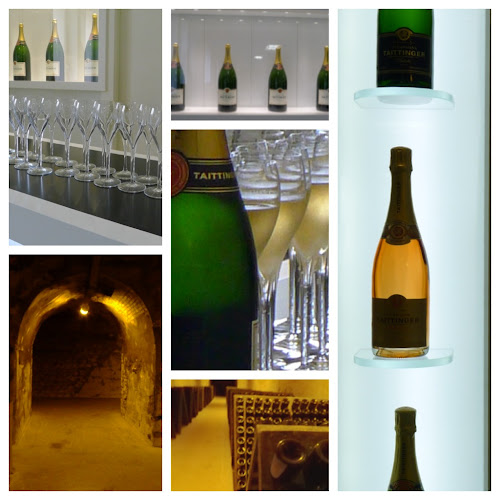 We then headed back to the hotel on the bus. We stopped at a pharmacy to get some cold medication for Deanna. The pharmacist was very helpful and asked all sorts of questions before presenting us with three different medications. One for cough, one for runny nose and one for inflammation. Hopefully these will help. She’s doing fine but it’s no fun being sick on vacation.

We’re off to Paris tomorrow on the train. Our last stop before heading home next Thursday.