Reims (rhymes with France, I know, don’t ask), is the centre of all things champagne. It was our intention today to visit one or more of the champagne cellars but Deanna was not feeling well at all. We did get out for a bit this morning to visit the cathedral. You would be forgiven if you thought the cathedral in the photo collage was Notre Dame in Paris. It’s strikingly similar, though not quite as grand, it comes pretty close. The cathedral was mostly destroyed in world war I and rebuilt. The rebuilding was done masterfully, however you can tell there are many bits that aren’t original. Most of the stained glass was destroyed except for the Rose window that was taken down prior to the war. It’s been replaced by various artists including Marc Chegall. 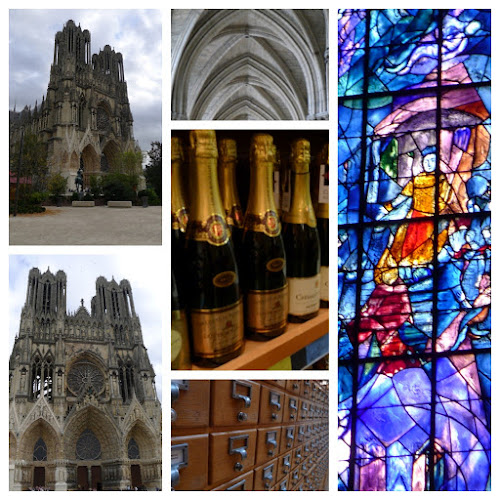 Just beside the cathedral is the Carnegie library. It’s part of a network of libraries funded by Andrew Carnegie and his philanthropy. It contained a small exhibit regarding the 800 year anniversary of the completion of the cathedral. It was all in French so we didn’t learn too much about it.

We headed back to the hotel and noticed a set of stalls setup with Quebec and Canadian flags. It turns out the Quebec tourism board is here and were selling all sorts of Canadiana type things from beer to pancakes and lumber jackets. Nice to see Canada represented here.

The rest of the day was spent at the hotel, taking it easy. I asked at the front desk if they knew where I could find some soup for Deanna and they had the restaurant next door make her up some and brought it to the room, which was very nice of them.

Hopefully we’ll get a chance to see some Champagne caves tomorrow. We’ll see how Deanna is felling.