We started off by eating breakfast at our hotel this morning. Usually, we’ve been grabbing a croissant/pan-au-chocolat in the morning but we decided to grab a bite here before heading out. We headed north a bit using the Lyon metro system. It’s very clean, easy to navigate and comprehensive. We walked for a bit and ended up at a silk shop where everything is hand made. We were treated to a guided tour by a young lady who speaks english. She explained that they were the fourth generation and made some very beautiful scarves, ties, art work.

We sat by the river for a bit and decided to go to the MUSE LUMIRE & MUSEUM OF CINEMA which chronicles the development and evolution of movie making. The two brothers basically invented motion pictures as we know it. The museum is housed in a turn of the century house that was built on the profits of the various inventions. We wandered through with the english audio guide and enjoyed seeing some early cameras and other artifacts related to film and cinema. If you’re a movie fan, or like photography, I would recommend spending a couple of hours here.

We then took the metro back to old Lyon and boarded a one hour river cruise that went down the la Saone and up the Rhone rivers and back again. It was interesting to see the city from the river. Rivers that have played a very important role in the development of the city.

We grabbed a quick sandwich and picked up some Macarons which are light coloured cookies that are filled with butter cream/jam/chocolate. The store we bought them from has 20 different flavors. We broke them open when we got back to the hotel room and had a couple. They are fantastic, I’m not sure the box will make it through the night.

I’ve enjoyed our time in Lyon. It’s a very vibrant city that is easy to get around and is full of history. I’m glad we spent a couple of days here. Tomorrow we’re off to Beaune which is in the capitol of the Burgundy wine region. 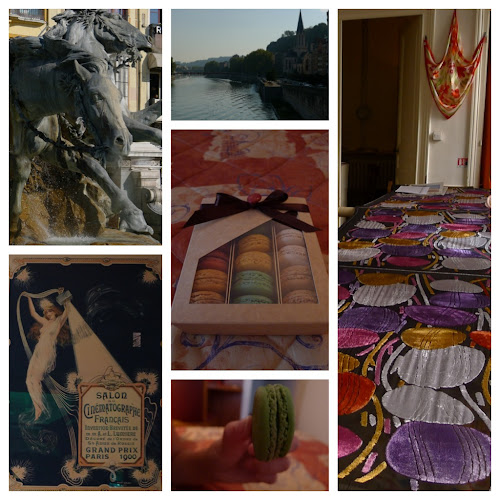