When I was originally planning the France portion of our trip, Lyon wasn’t on the itinerary. I was planning a few days in Chamonix but couldn’t practically swing it on the train. It would have involved a few transfers and some long layovers and in the end, I opted to swap out the Chamonix part for Lyon. Knowing now that driving in France isn’t such a big deal, I probably would have just kept the car for the entire two weeks that we are not in Paris and skipped the train. However, that’s not what I did so here we are in Lyon.

Lyon is quite a nice place actually. It’s the third largest city in France, behind Paris and Marseille but it feels quite livable. We’re just across the river from the old part of the city.

We started the day by taking a funicular up to Basilica of Notre-Dame de Fourvire. It’s perched high on above the city of Lyon and can be seen from all over the city. It’s a beautiful church dedicated to Mary.

A short walk away is the Gallo-Roman Museum of Lyon. It was built in 1975 and holds a fascinating collection of Roman artifacts that were found near the two Roman amphitheaters next to the museum and around the Lyon region. The museum was free to enter today because it was Thursday and we spent more than two hours wandering through it looking at some very interesting artifacts and exhibits. It’s a very large collection and well worth a visit.

Outside there are two Roman theaters that are amazingly well preserved and still used today for various events.

We headed back down the hill for a bite of lunch and a stop at what the guide book says is the best ice cream in Lyon. It was very tasty to be sure.

After more wandering around we headed back to the hotel for a bit of a break before heading out for dinner. One of Deanna’s comfort foods are nachos. Finding nachos in France is not the easiest thing to do however we did find some in a restaurant not too far away. I had chicken fajitas which were not bad. 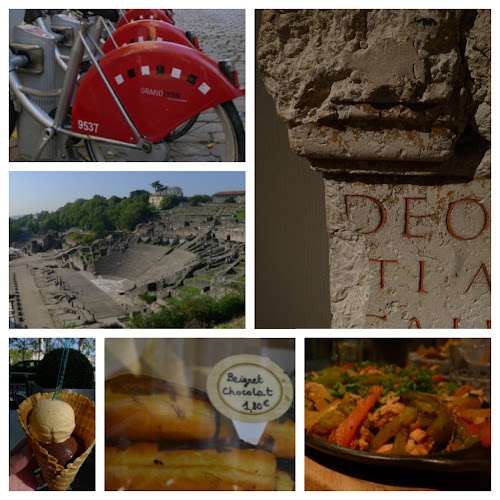