Today was a travel day as we say au revoir to Aix-En-Provence and bonjour to Lyon. I can’t say that I loved Aix. It was fine but it was a bit far away from the heart of provence where I wanted to explore a bit easier and it was a bit big and hard(ish) to navigate around/in. Don’t get me wrong, it was a nice enough place and we enjoyed our time there but it won’t go down as someplace we would need to go back to anytime soon. I think for the next trip to Provence (whenever that might be), we would stay in a smaller town more in the heart of the region.

We checked out of our hotel, bought a couple of pain-au-chocolat and headed to the train station. I had arranged to return the car at the train station which turned out to be about 20km out of town. We arrived in plenty of time, dropped out little Citron off (a great little car) and headed into the train station. It’s a very new, modern building that services the region. When we got there the place was just packed with people but within 20 minutes it was pretty much empty as people got onto trains heading all over france.

I have purchased all of our train tickets ahead of time before we left. There is a great website that works great for buying tickets. For each leg of our trip, we get a six digit code/pin that we enter into a ticket machine when we get to the train station. It prints the tickets and we’re ready to go. That part went without a problem. Things started to get a bit off when I noticed that our train wasn’t listed on the departures board.

The trip I booked was from Aix to Marseille, changing trains in Marseille and then going to Lyon. There were a couple of Marseille trains, but the # and the times didn’t match up with ours. I asked at the ticket office and the lady mentioned that the board would be updated once the first Lyon train arrived (it was late). We waited for 30 minutes and I asked again. She took a better look at our tickets and noticed that we were actually at the wrong station. There is a local Aix station and the TGV station. We were at the wrong one. My bad. I didn’t realize this. There is a bus that one can take between the two, but by this time it was too late to make our train. We ended up booking a direct train from Aix to Lyon. It cost me an extra 42 but in the grand scheme of things, having a direct train to Lyon was worth the extra money. The trip to Lyon was fine. The trains are new, quite comfortable and in less than two hours, we were in Lyon.

We opted to take a cab from the train station to our hotel. It was only 13 and saved us from schlepping our bags on two different subway lines. Door to door service is nice, particularly when we’re in a new city and don’t know where we’re going.

Our hotel is in a great location, just east of the old town of Lyon. There are lots of restaurants and shops of every description on the street. It’s a mostly pedestrian street though there are a few cars that seem to spring up every now and then.

We hadn’t eaten anything so we went in search for lunch. Our timing wasn’t great as many places close after 2:00 and don’t open again until 7:00 pm for dinner. We did find a spot that had wraps and sandwiches and beignet!!! I’ve been on the lookout for beignet ever since we got to France and today was the first one that we spotted. We had beignet on our last trip to France nice years ago and really enjoyed them. They’re sort of like filled doughnuts but lighter. The ones we had today were not nearly as good as I remember them, but the fact that we found them makes me a happy camper. The beignet in New Orleans are not the same. Nope, not even close.

After lunch, we wandered around a bit to get oriented. We spent a bit of time in the old part of town. We did stop in at Saint Jean Cathedral which had some beautiful stained glass. We were there just as the sun was at the right angle and the church was filled with this really wonderful light. The cathedral is also home to a 700 year old clock which is very cool.

At this point, we decided to call it a sight-seeing day and head back to the hotel for a bit of a break before diner.

At 7:00, we headed back out to a restaurant (bleu de toi) we wandered by at lunch time that was serving moules et frittes. The ones I had yesterday in Avignon, weren’t great so I thought another attempt was warranted. These ones were much better. I had mine with sauce Provencal, which had wine,cream and tomatoes. Deanna had hers with curry. Both were quite tasty, much better than those from yesterday. We sat outside again and really enjoyed people watching as we ate. This cafe culture is wonderful. I can see how people can live in tiny little apartments and spend time out doors (at least in the summer time). The weather continues to be fantastic, probably another 30 degree day here today. We’ve been really fortunate this entire trip. The weather has been perfect. 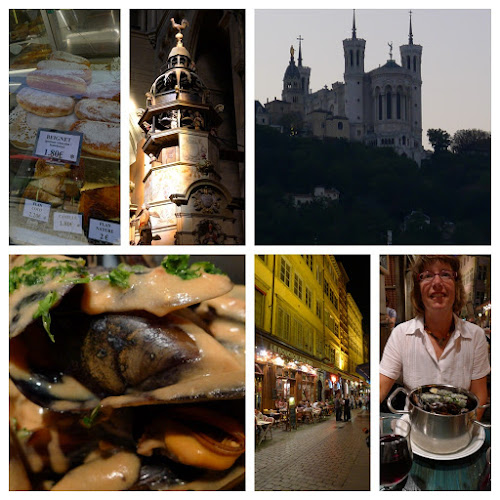