We headed up to Avignon for the day today. It’s an hour north of Aix, mostly on the autoroute so the navigation was pretty easy.

Avignon is most known for being the papal residence from 9 March 1309 until 13 January 1377. The centre of the roman catholic church was not in Rome during this time. The palace of the popes is a very impressive building that was constructed in 20 years. From here, the catholic church was run during the dates above. It is said that Catherine of Sienna was the reason the church returned to Rome. She made a pilgrimage from Sienna to Avignon to convince Gregory IX to return the church. We came across St. Catherine in Sienna, San Gimignano and Rome. It was interesting to complete the circuit here.

The tour of the palace included an audio guide that was very helpful in explaining the various rooms and artifacts we were looking at. We spent a couple of hours on the tour. It was very interesting and well worth the time and money.

You may have also heard of the Pont d’Avignon which is made famous in a French Nursery rhyme. If memory serves, the grocer’s assistant in Amelie sings a bit of this song in the movie. I’ll have to check that out when I get back.

After finishing up in the palace we needed some lunch and stopped for a bite to eat. I had some mussels and fries (very common in this part of france) and Deanna had a pizza. They were just ok. It was nice eating outside though, something we’ve done quite a bit of this trip.

After lunch, we spent a bit of time exploring the back streets of Avignon using our guide book. It was nice to get away from the crowds and see another side of Avignon. 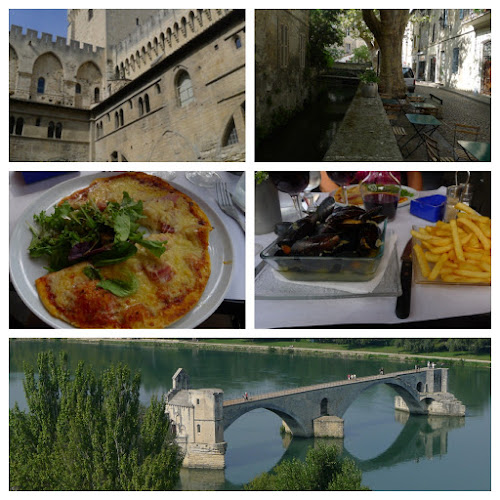 We’re turning the car in tomorrow and heading to Lyon on the train.