We hopped in the car again today to explore a bit of the Provence countryside. It’s a fairly large area and one could take many months (years?) to explore all the nooks and crannies that is Provence. Our foray isn’t that ambitious so today we wanted to have a look at Roussillon and L’Isle-sur-la-Sorgue

We headed out of Aix on the autoroute for a few km before exiting and driving some of the back roads of Provence. Much like our trip into Aix it was a bit of a muddle with lots of roundabouts, roads not signed, and sometimes the names not matching up with that on our maps. However we got to where we wanted to get to and it was worth it.

Enroute to Rousillon, we stopped at a little town called Bonnieux. It was one of a few that we were driving through and really the only reason we stopped was a parking spot came available and I scooted into it on a lark. It’s a quiet little town (like most), we walked by Le Muse de la Boulangerie (yes, that’s a bakery museum) and wandered up to the church which is on the top of the hill and has some amazing views of the surrounding countryside.

From there, it was a short drive into Rousillon which is famous for it’s ochre cliffs. All the buildings are painted in various shades of orange and yellows. To match the scenery one would gather. It’s up on a hill and like Bonnieux, has some pretty spectacular views of the countryside.

Deanna was feeling a bit peckish and decided to have a ham and brie sandwich.

After wandering around town a bit (and feeding a couple of friendly cats some remnants of the sandwich), we drove to L’Isle-sur-la-Sorgue. This town is completely different in that it’s built along a stream. The stream was used originally to power a number of water wheels to support all kinds of industry, mostly around cloth and textiles. Now, it’s just a pleasant part of the town. I had a gillete for lunch, which is a savory crepe. It was filled with goats cheese and tomatoes and had a slice of cured ham on top. It came with a little pot of honey which went really well with everything. Deanna had a maple syrup dessert crepe which disappeared quite quickly.

We completed our circuit by heading mostly home on the autoroute, which, as you would imagine covers a lot of ground in a short amount of time.

Another great day on our European Adventure. We have one more full day here in Aix before turning in the car and taking the train to Lyon. No plans for the day tomorrow yet. Perhaps another trip into the countryside. We’ll see. 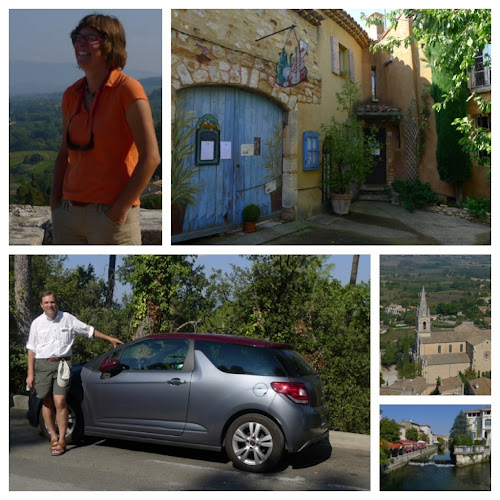