We planned to take today a bit easy and Aix complied with us. We needed to change rooms at our hotel as I had originally booked for three nights instead of four and they couldn’t keep us in the same room. Our new room is larger and has a kitchenette. It must have been an apartment/flat at some point in it’s existence. It has a refrigerator and a cook top. We decided to head to a small grocery store and pick up some soup and bread for lunch.

The old part of Aix where we are staying is very quiet on a Sunday. Most (>95%) of the stores are closed which compared to yesterday was a nice change.

However, there was an ironman tri-athalon going on today. The runners ran right by our hotel. We’re not sure where the swimming and the biking were being held as we didn’t see that but we did see runners. Lots and lots of runners.

We wandered around and did tour the Aix Cathedral. As I mentioned most of the shops were closed but there were a couple of candy/cookie stores that had beautiful displays of cookies and candies. We didn’t have any, but instead opted for some ice-cream sandwiches made which tided us over until dinner.

Dinner in Europe doesn’t get going until 7:00 which is still something we’re getting used to. The hotel did recommend a place last night that we looked at but opted to wander around and found our great burgers. We thought about going back tonight but like many places it was closed. We did find a place not too far away. Deanna had this seafood salad that came served on a bread board. I opted for the lasagna. Both were tasty. 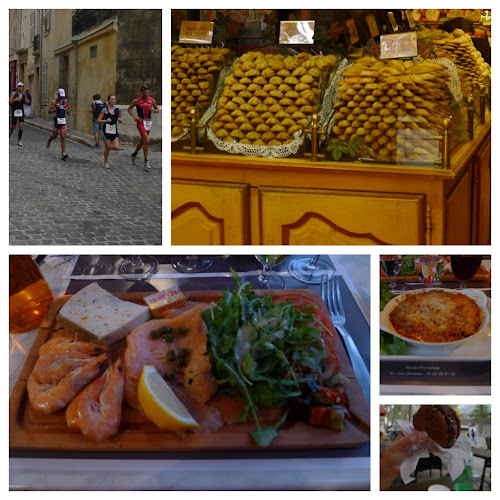