It is with some sadness, that we bid the Hotel Welcome and the charming little village of Villefrance-sur-mer adieu but it’s time to hit the road for Provence.

We decided to take the scenic route today. We could have driven the auto-route all the way from Nice to Aix in about one and half or two hours. Instead we decided to head through the mountains and see the French Grand Canyon. We’ve been doing really well getting around without the GPS.The iPhone and my data plan along with good old analog maps have served us well.

Today we had to figure out the French toll road system. We didn’t drive on the auto route for too long today so it wasn’t too difficult. On one stretch we had to pay to enter the road (2.80). In that case, it was a throw the coins in the basket sort of a setup. The french system even gives change, how nice is that? Near the end of the trip there was a different system where we took a ticket to enter the freeway and then had to pay when we exited (3.90). It’s very well marked with many lanes to choose from. Not a big deal.

We’re still getting the hang of roundabouts though. The concept is fine, yield to vehicles in the circle, enter when you can, drive around until your exit and leave. Two things are confusing. 1) The larger roundabouts have two lanes. I have no idea when you’re supposed to be in the inside lane and when not. 2) In some cases, the list of destinations is six or seven signs stacked up on one another. Trying to make split second decisions on when to exit with cars coming in and leaving the circle can be quite stressful. We did great and only got messed up when going through Grasse. There was about six roundabouts in 10 minutes and we did the first five great, somehow we missed the sign we were looking for on the sixth one and ended up driving through some very narrow side roads trying to get back on track. But, on track we got and outside of Grasse proceeded to climb up and up to just over 1000m, which is pretty impressive given that we started the day at sea level and by 11:30 we were up in the mountains.

It was a beautiful drive. The mountains are similar to those back home, but seem a bit more stark, at least near Grasse. Not as many trees, lots of rock and shear faces. The road wound up and back and down and around. It was fun to drive, not as much fun to be a passenger though Deanna didn’t complain once.

We stopped for a break in Castellane, which is the “gateway to the Verdon Gorge”. It was market day and we got there just in time to wander through and look at some fresh fritter, spices, honey, perfume, jewelry; all manor of things. We picked up a slice of pizza and a quiche from a boulangerie and had a quick break before heading back on the road.

The road passed through some very amazing scenery. Deep valleys, mountain tops ranges, small little towns, farm land you name it we drove through it. The roads were narrow, had no lines and in some cases were not wide enough for two vehicles to pass each other. We rounded a corner towards a tunnel only to see a small motor home halfway through the one lane tunnel and had to backup a bit for him to pass by. The speeds at which folks drive these roads is also crazy. But all was good and like I mentioned us and our little Citroen did awesomesauce.

After another couple of hours of these topsy-turvey roads we stopped for another break at Moustiers-Sainte-Marie a very beautiful town tat spills down the mountainside. Parking was a pain (as usual), but we did wedge ourselves into a spot that wasn’t really a spot but was close enough. The town was busy as it looks like a wedding was going on. The town is known for it’s pottery (we didn’t know this), and Deanna bought a hand painted pie plate that is very nice. From there, we did the home stretch into Aix-en-provence, about 90 minutes. The last 45 or so were on the expressway so that wasn’t so bad. There was the highest posted speed limit on this road I’ve personally seen, 130 km/h. Back home, the fastest posted limit is 110 km/h. Some were driving faster than that,

We made it into Aix around 5:00 after about seven hours of driving including breaks. Yes, we could have driven and made it in 90 minutes on the express route, but what’s the fun in that. Today was very much about the journey and not the destination.

We parked in a parking garage and walked about 10 minutes to Hotel Cardinal.

We were both quite hungry and wandered out to find dinner. It’s very very busy here. My goodness. I didn’t realize how big Aix is. Not sure what I was expecting but there are a huge amount of folks around. Restaurants generally don’t open until 7:00 and we decided we couldn’t wait. We stumbled upon a Burger Bar and gave in. OMG they made some tasty burgers and fries. Deanna had pesto on hers and mine came with Emmental cheese. The fries were done perfectly (twice fried as all good fries should be) and everything was super fresh. We had some onion rings to start and they were hand breaded and came with two dipping sauces that were both tasty.

We were stuffed. Sometimes a good burger is all one needs to remind us of home and that one did the trick. 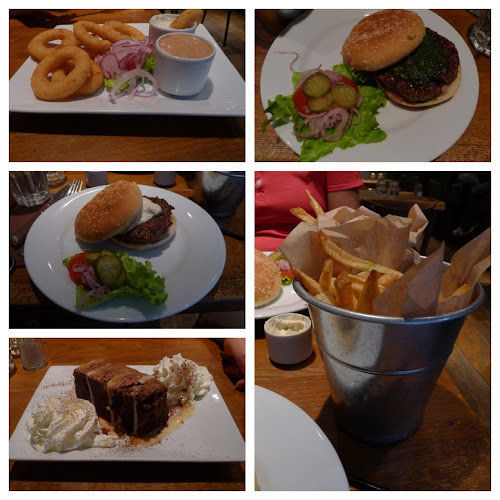 The plan is to explore Aix tomorrow and then head out to explore provence on Monday. The tour guide (me), needs to do some reading to figure out what we should be doing.