After a relaxing day on the beach yesterday, we decided to get a bit more adventurous and drive to Monaco for a few hours.

The first order of business was to get the car from the parking lot. Parking in Europe is expensive. Like crazy expensive. It cost us 65 for a day and a half. Don’t do the conversion, don’t tell me, I don’t want to know ;). Monaco is not far from Villefrance, around 20 km or so. There are three different roads (cornices) that traverse from Nice to Monaco. We opted for the second one which has some nice views and travels through the picturesque town of Eze. We stopped in Eze to pick up a Michelin road map and some fruit for breakfast. From there it was a fairly easy drive to Monaco. I was thinking of my friend Steve Kaltenhauser as I was driving these roads, about how much he and his Audi would love to drive them. Lots of tight curves. Our rental car is fun to drive (more about it in another post) so it wasn’t too stressful even though we were in uncharted territory.

We ended up driving through Monaco, not exactly sure where to park. I ended up heading to a parking garage that I saw coming into town beside the Jardain Exotique. It was at the top of town and most of the sights are at the bottom. We took a bunch of stairs and a few elevators to make it down to the Royal Palace. This is where Monaco’s royal family lives. We arrived just in time to see the chaining of the guard which happens at 11:55 each day. I would like to say this was planned well in advance, but alas, it was just one of this happy circumstances that sometimes happens when we travel. We walked around the palace square and the gardens beside the aquarium. The views from the gardens were quite spectacular.

Monaco is full of very wealthy people who can spend millions of dollars on stuff. They apparently like yachts. Very. Large. Yachts. We didn’t go to the casino (not really our thing), but it’s apparently quite nice. I didn’t pack my James Bond dinner jacket so they probably wouldn’t have let me in anyway. 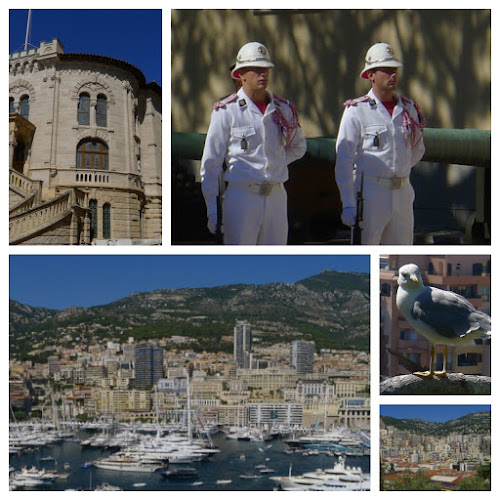 We headed back to Villefrance mid afternoon for a bit of reading and relaxing before heading back to Le Serre for dinner. We had such a good meal there last night we decided to head back again. This time for pizza. I had one with lots of seafood. Deanna’s had tuna, mushrooms, artichoke hearts and pesto. We shared an apple pie with some of the best vanilla ice cream the two of us have eaten. 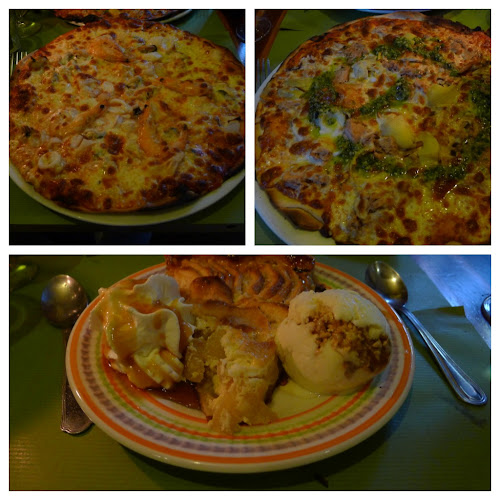 Tomorrow, we’re off to Nice for the day. We really like Villefrance-sur-mer. It’s a great little town.