Ah Roma. What can said about the wonder and splendor of Rome that hasn’t been written before. Rome was the centre of the western world and continues to be a keystone in the areas of art, fashion, religion, culture, cuisine and just about any other facet of life one can think of.

We arrived in Rome around lunch time, with just enough time to dump our bags, grab a quick sandwich and hop on the subway system to meet our local guide Francesca Caruso, for our ancient Rome tour. I have actually heard Francesca in a number of the audio shows that Rick Steves’ produces. She’s a native Roman but speaks fluent english as her mother was born in California. She has a magical gift for making the city come alive, not an easy task as the depth of what can be found here is quite overwhelming. Rome has had inhabitants for well over 2000 years. It’s full of iconography that is very common place. Things like the Colosseum, the Pantheon and the Forum are locations that you’ve no doubt seen many many times, in books, movies and in photos. Seeing them up close and in person is both inspiring and a bit overwhelming.

A bit footsore after four hours of tramping around, we had a bit of time to grab dinner on our own. We joined three other couples (Matt, Marry, Millie, Jim, Bill and Sue) for a quick bite.

After dinner we rejoined the larger group back at the Pantheon for a night walk through some of the sights of Rome. Rome at night is very cool. All of the fountains are illuminated as are the piazzas. We headed over to Piazza Navona which contains the fountain of the four rivers by Bernini. In addition to the usual group of guys selling all sorts of garbage (fake handbags, glowing spinning things that they throw into the air), this one had a large selection of artists selling what looked to be very nice work. We didn’t have too much time to look at them but from what we saw they looked very nice.

Our walk took us to Trevi fountain which is also best observed at night. It’s at this fountain where the tradition of throwing a coin over your left shoulder will ensure that you come visit Rome again in the future. Robin treated everyone to a gelato at one of her favorite spots. I had crema and caramel and Deanna had honey and lemon. I should probably do an entire post on gelato. It varies quite a bit between towns and each one is good in a different way. This gelato was more creamy than ones we’ve had in the past, more like ice cream. Other gelato tended toward more like a creamy sorbet but not really. It’s hard to explain. You’ll just need to come to Italy and try them for yourself.

Fortified with gelato, we walked up the Spanish steps and back to our hotel. Exhausted after a very inspiring day. 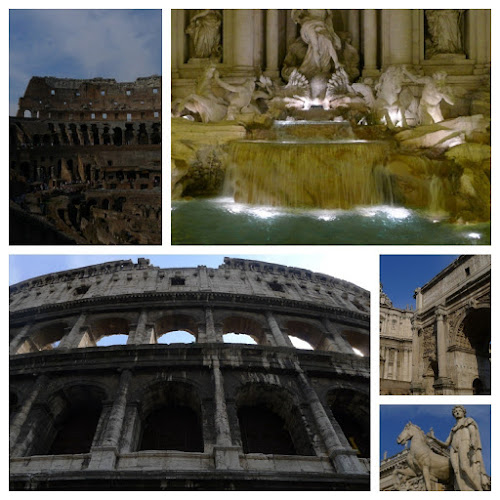